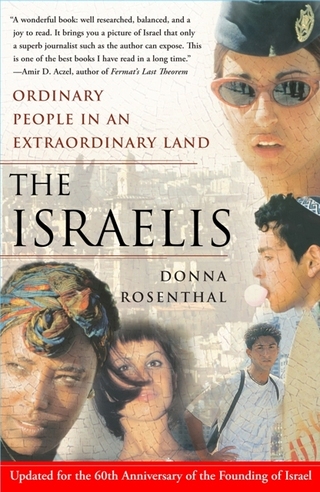 Over 100 favorable international reviews across the political and religious spectrums -- from the U.S. to Japan, from Germany to China and Israel to India.

The most upbeat of recent books on the Israeli-Palestinian conflict is Donna Rosenthal's THE ISRAELIS, mostly because it is not political at all. Rosenthal, a journalist, has given us a panorama of Israeli diversity , -- Ashkenazim and Sephardim, Orthodox and secular, Russians and Ethiopians, Arabs and Christians, even adulterers and gays.

Although other books tell us that Israel's blinders limit its perception of its neighbors, this one heartens us with the prospect that ultimately an idea might prevail that permits Israeli society and the Arabs to live in peace. Given the horrific news we read every day in the newspapers, that's easy to forget. Thanks, Ms. Rosenthal!

"Today's headlines leave the impression there's little to know about Israel outside of its conflict with the Palestinians. Using Hedrick Smith's landmark The Russians as a model, journalist Rosenthal, with years of experience in and knowledge of the Middle East, defies that notion, giving an in-depth look at the rich variety of people in the Jewish state. Relying on dozens of interviews, she gives us a lively, variegated portrait of all facets of Israeli life. Terrorism and relations with the Palestinians are covered, but so are secular-religious tensions, Ashkenazi-Sephardi divisions, Israeli Arabs and Jewish immigrants from Ethiopia and Russia.

Throughout, Rosenthal stresses the contradictions in Israel: a country steeped in historical and religious tradition that is trying to develop a high-tech economic future; a democracy that many see as favoring its Jewish citizens about its Arab ones; a country ruled in some ways by a rigid religious establishment that also maintains thriving gay and lesbian communities.

Rosenthal displays prodigious reporting and allows the people themselves -whether Jewish or Arab, men or women, religious or secular- to speak, and their voices are alternately despairing and hopeful, defiant and conciliatory.

As a result, she captures an entire country, one full of flux and drama, in as vivid and nuanced a way as possible; a former male model turns Orthodox; an Ethiopian who "had never used electricity" until he was twelve" now designs computers. With the huge interest in Israel among the reading public, this is likely to find a sizable audience."

The subtitle of this informative, well-researched book says it all. But it could also have been subtitled: "Everything you always wanted to know about Israel and the Israelis but were afraid to ask."

Donna Rosenthal has taken almost every aspect of life in Israel - religion, army, social mores, ethnic groups, and many others - and explained them objectively, in each case through the eyes of the "ordinary Israeli" of the subtitle and not, refreshingly, from the viewpoint of politicians or sociologists. Her training and skill as a journalist are put to excellent use as she asks the questions which let her interviewees give revealing answers. Rosenthal has succeeded in presenting an accurate picture of daily life in Israel for its variety of citizens.

Unlike the myriad of other books on this tiny nation, THE ISRAELIS illuminates the daily lives and backgrounds of Israelis unknown to many in the world, highlighting their diverse lifestyles, and their varied beliefs and attitudes toward Israel.

The strength of this book is its focus on various Israelis and their individual stories, put together to provide a comprehensive and diverse picture of each group. It's the story of Israel's version of Bill Gates, high-tech pioneer Gil Shwed, and the hundreds of others who have transformed Israel into one of the most productive technology centers in the world. Or the story of Meir Bouskila, a Moroccan immigrant who has coached youth soccer for 20 years in one of the poorest neighborhoods of Be'er Sheva, keeping thousands of Mizrahi youth off the streets. Or the story of Dr. Yasser Mansour, an Arab Israeli Muslim doctor working in the diverse city of Haifa, saving both Muslims and Jews, while feeling the pull of both Israeli and Arab identities.

THE ISRAELIS is an illuminating work for anyone looking for an in-depth and accurate portrait of the diversity of Israeli society today, and is a book that can be appreciated by Israelis and non-Israelis alike.

In THE ISRAELIS, journalist Donna Rosenthal, who worked in Israeli radio and TV, gives us a broad, well-informed picture of its citizenry. She methodically limns the various ethnic and religious subcultures, Jewish and non-Jewish, that constitute the vibrant and fragile mosaic of Israeli society.

Her language is breezy and her technique anecdotal, blending first-person narratives with facts and figures, historical background, and various piquant asides ... Travelers to Israel, armchair and otherwise, will find THE ISRAELIS very useful.

"An amiable portrait of the 7.4 million people -- a population about the size of Baghdad's -- who live in a country smaller than New Jersey but that "captures the lion's share of the world's headlines."Chalk it up to the Bible and news formulas, perhaps, but many American readers might find it odd to imagine that for many an Israeli, there's nothing quite so wonderful as a trip to a Tel Aviv shopping mall, a slice of pizza, and the new Eminem CD. Such people populate the pages of former Jerusalem Post reporter and Israeli TV producer Rosenthal's lively take, which centers on ordinary citizens in what Rosenthal trusts are "abnormal times."

Many of these ordinary Israelis, Rosenthal writes, love to argue in cafes, offer unsolicited advice to strangers, participate in all-night raves on the Red Sea, hang out in Katmandu, and smoke a little weed or indulge in stronger pleasures; many others wrestle to preserve traditional practices in the face of the globalizing pressures that are changing the world. Consider headgear as a tribal badge, Rosenthal suggests: "Israelis wear army helmets, kippot (yarmulkes), kaffiyehs (Arabic headdresses), wigs, and veils. They also wear baseball caps backwards and earphones connected to MP3 players." Some, despite the presence of Orthodox " modesty patrols," are gay (though, says one such person, "In our world, being gay is like eating pork on Yom Kippur"; some, despite injunctions against it, live with members of the opposite sex outside marriage; some, quite apart form the Palestinian population, are not Jewish.

By Rosenthal's account, Israeli society adds up to "a large extended, sometimes dysfunctional, family," made perhaps a little more dysfunctional by the constant threat of war and terrorism, which even peace activists seem to accept as an unhappy face of life. Which, she quotes former Jerusalem mayor Teddy Kollek as saying, explains why Israelis are such bad drivers: "When you have to fight a war every few years, safe driving becomes the farthest thing from your mind."

A lively, cliché-popping account, sure to irritate fundamentalists and the humorless, but a treat for everyone else."

HADASSAH MAGAZINE:
"From the ultra-Orhtodox who slip prayer faxes into the Western Wall to traditional Ethiopians who kiss the knees of respected elders; from educated, affluent Chritian Arabs to Russian brainiacs changing technology and science; from peace-activist Muslim doctors to Bedouin women teaching sex education, to kibbutzniks who raise crops electronically. Rosenthal tells their stories with wit, diligence and without making judgements. A very literate work that anyone - no matter how extensive their knowledge of Israel -- can learn from. THE ISRAELIS teaches us that in Israel, stereotypes fo not apply - Muslims can be loyal to the state or to Hamas, Jews may follow the politics of peace or revenge, and rabbis may be fantastic or fanatical. One wonders how a tiny country can contain so many contradicitons and communities with such divergent needs. "

THE WEEKLY STANDARD:
"One of the most fascinating and detailed insights into any country written by a close observer in recent memory. Rosenthal's dispassionate style is powerful. Scrupulously fair."

REFORM JUDAISM MAGAZINE:(OUTSTANDING BOOK AWARD)
"This in-depth portrait of Israeli society today -- based on interviews with hundreds of Israelis from all walks of life as well as different ethnic groups and religions -- reveals a human face of Israel that is often lost behind the headlines."


SAN FRANCISCO CHRONICLE:
"We all hear about the Israeli-Palestinian conflict. But what about the people? Donna Rosenthal shares their stories...Even in Israel, THE ISRAELIS has shocked readers who didn't realize the depth of cultures in the country.

ATLANTA JOURNAL CONSTITUTION:
"She stands aside and listens. A masterpiece."

PHILADELPHIA EXPONENT:
"Her writing is engaging, often gripping. This book is one of a type that appears every 15 or 20 years from American publishers."